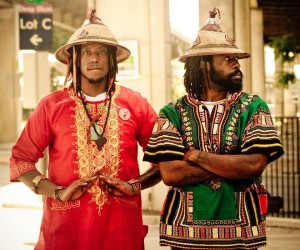 *PS the Rebels*, aka Pihon N SamUiLL are all about creating music with a deeper meaning; not only entertaining their audience, but raising awareness and elevating minds with a forward-thinking approach.True hip-hop as always been an interesting genre: much like an artist with a canvas and colors, a musician can actually throw in so many different things into a track, making things unique and interesting in terms of sound. The same applies to the meaning of the music, and this is why PS the Rebels aren’t afraid to use their art as their expression of social activism, sharing their work with their audience. But not only musically is this duo involved in activism, PS the ReBels consistently support several groups and grass roots organizations that are structured to rebuild broken communities and focused on the liberation of oppressed people all over the world.PS The Rebels are currently finishing up their anticipated release “The Great Migration EP” set for release later this year. They are very striking for their ability in the studio and writing lyrics, but their live performances are where they can truly connect with their listeners.

A plethora of shows alongside stars such as Kendrick Lamar, Erykah Badu, Pharoahe Monch, Slaughterhouse and Immortal Technique are just a few examples of the reach and versatility of this combo!